A client of mine bought the first-generation Xserve two years ago, putting it into production as a respectably high-traffic web server. While repairing some database damage on that machine the other day, it occurred to me that the specs on the Mac Mini are surprisingly in line with that first Xserve.

The disk and RAM are faster and more expandable in the server, but the Mini's single CPU and bus speeds are faster, its video card is necessarily sexier, it throws in an optical drive and USB 2.0, it's wireless-friendly, it silently occupies slightly less than one-tenth the space, and it costs one-sixth as much.

Obviously the Mini isn't built to to same industrial tolerances and one shouldn't deploy a big public server on a 4200 RPM drive, but a lot of the Minis going to existing Mac owners are essentially going to wind up as Xserves for the home. Somehow this seems like a better mental fit to me than comparing the Mini to the last of the G4 towers, my first inclination. 10:13AM «

A pair of fine moments from NPR: Terry Gross' meticulous interview of Stephen Colbert (including commentary on his coverage of the political conventions, a dreadful story about high school, and an impromptu rendition of the "This Week in God" theme beeps), and from Day to Day, a lovely clip of Johnny Carson from 1988, introducing Bill Clinton after his interminable Democratic convention speech. 09:54AM «

I was struck watching one of the unaired Firefly episodes ("The Message") by how much an incidental audio playback device resembles the recently introduced iPod Shuffle. Apparently by the year ~2500, Apple will have made it slightly thicker, changed the color, stripped the symbols off the wheel and added two buttons for unspecified purposes. It also seems to have a small speaker in it somewhere.

No word on price changes, though I imagine 500 years of inflation would make any specific quoted price rather moot. 04:15PM «

After an abortive and mostly unheralded effort in early January, the Seattle public library regrouped and will be upgrading its creaky old catalog software in February. The current software, to the degree as I interact with it on the web, is unpleasant -- all the internal links are javascript-generated, so they resist being placed in tabs and fight with lots of my well-ingrained web habits. Also, very slow. The new software promises to be faster, more accessible, and to even offer RSS feeds for queries, holds, or account status. Neat. 05:24PM «

Two fine stories about the Man for your consumption: Tim Bray skillfully manipulates the Kabuki theater of modern air travel to improve the chances that he makes his plane, and German pranksters elegantly raise the bar, to the point of being actively sought by police who "don't know what we would do if we caught them red-handed." That is all. 02:27PM «

I've read that the Simpsons was the first show to anticipate that its viewers would pause their VCRs to get jokes that only remained on the screen for a few frames. That was a long time ago, though, and the advent of Tivo has dragged freeze-framing more thoroughly into the mainstream.

I confess that I've indulged in the practice from time to time, and I'm consistently surprised that TV shows still think they can get away with filling memos with text copied from newspaper stories, newspaper stories with text copied from memos, or repeating the same sentence or paragraph ad infinitum. Once in a while I'll catch a inside joke (on the West Wing, I once noticed a phone log that whimsically included the consecutive first names "Bill", "Hillary", and "Monica"), but laziness often prevails. 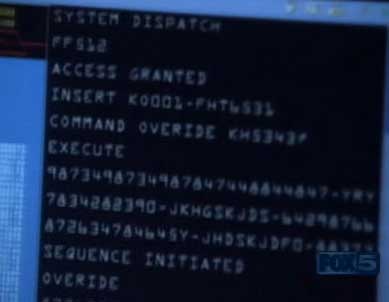 Note the doubled misspelling of "override", and the contemptuous line-noise: numerically and alphabetically segregated, the latter derived disproportionately from the center row of a QWERTY keyboard. For shame, intern, outsourcing your graphic creation to a baby.

By way of contrast, Ron Moore's openness with his show's fans' pedantic questions, and his belief that concocting an answer would hurt his story, is sort of a breath of fresh air. 01:50PM «

Robert Rodriguez is in a very small category of directors I respect, and whose movies I will generally go and see, despite liking little of his output -- basically just El Mariachi and the first Spy Kids. There are almost always some terrific images (like the lunchbox full of money, or Johnny Depp's philosophy of puerco pibil in Once Upon A Time In Mexico), but they seldom add up to a movie I'd recommend on its merits. I'm familiar with Frank Miller's graphic novels only by reputation, and I knew nothing about Sin City beyond the title.

All that said, this trailer for Rodriguez' adaptation of Sin City is seductive. I may be susceptible to stylized urban noir, but I can't recall a trailer that did a better job of communicating potential. It not only fails to give away the store, it refuses to communicate anything of substance about the story.

Actors' careers are openly leveraged to telegraph personality with a few frames (e.g. Clive Owen, Brittany Murphy, Bruce Willis), or else they're hidden so far behind prosthetics and makeup (Mickey Rourke, Benicio Del Toro, Alexis Bledel) only their voices and silhouettes feel familiar. The music is brain-stem catchy and so tightly wrapped around sub-second cuts that I was surprised to learn it existed in any other form. The just-shy-of-three-dimensional CGI sets look like they were constructed using Mystery Spot tricks and shot with an antique lens in a suburb of Toontown, as opposed to last year's Sky Captain, whose sets looked like they were cooked up in a dingy computer.

I've seen it eight or so times since noticing it yesterday, and I can't figure out how the movie is supposed to live up to the standard set by the trailer. Come April, I'll be happy to shell out ten bucks to find out. 02:53PM «

The Mac Mini looks compelling. I was always a fan of the Cube, and was sorry to see its plug pulled. The price is lovely, well-targeted at many people (especially Windows people) who already have keyboards, mice, and VGA/DVI displays lying around. It's also a good option for people who want a cute little computer to go with their enormous new HDTVs.

The G4 is still a worthy performer by most people's standards, so I'm not concerned about that. The graphics card won't be able to hack CoreImage when Tiger comes out, however, and for a machine introduced just a few months before Tiger ostensibly ships, that's potentially more of a problem.

Unfortunately, the price takes a beating if the tech specs page is correct in asserting that any "[m]emory upgrade must be performed by an Apple Authorized Service provider." Mac OS X can sulk something fierce if you skimp on memory. With only one slot (as indicated by the round 1GB maximum), and suffering an extra expense to have it put into place, it doesn't make sense to get less than the maximum, which adds $425 to the sticker price from the Apple Store. Froogle indicates that even if you shop around, you're still spending about $300 for the 1GB "DDR 333" chip by itself, more than 30% higher than than the comparable PC2100 chip for my powerbook, before any cost of installation. Ow.

Update 1/12/05: I was wrong about the cost of third-party RAM: it's way cheaper than I thought, with three sources and four brands below $160 for a shipped 1 GB module. That's close to Apple's typical 3-to-1 markup for factory-installed RAM. It's far more affordable to buy it yourself and have it professionally installed than I thought yesterday.

There's no telling yet how protracted a job that'll be, as the Mini allegedly won't even have screws, but at least the RAM chip doesn't appear to be buried inside the unit. Thanks to Tony Cary and Mike Slater for the price update and the timely picture of the internals.

Update update: Henry Norr, who is credible even when being published by Macintouch, says that Mac Mini users can laboriously open the case and replace their own RAM, which, with moderate hilarity, "does not void the warranty unless you damage something." Airport and Bluetooth will not be user-installable after purchase, and will only be dealer-installable as a pair. 11:43AM «

I still hold a grudge against clownish hack Juan Williams for providing such scant coverage of Ashcroft's confirmation hearings four years ago, so I was pleased to learn this morning that Alberto Gonzalez' confirmation hearings are being broadcast in their entirety on KUOW2, my local NPR station's web-only, Windows-Media-only alternate programming channel. It's on right now.

I trust it'll be easier now than four years ago to find complete downloadable audio of the hearings, after the fact.

I'm disappointed but not surprised to learn that Arlen Specter says "Nucular." It's even more disappointing that he brings up "the nuclear option" in his opening statement as judiciary chair. Going to be a long session (though Leahy's off to a good start). 06:47AM «

Ostensibly, I bought a 200 GB bare drive yesterday from Outpost.com, now owned by Fry's. It was a darn good deal, with a $60 rebate on a $150 drive, including taxes and two-day shipping. A lot of other people apparently thought it was a good deal, too, because Outpost sold out.

What makes this sorry episode worth mentioning is that they sold out somewhere between seven and sixteen hours before the product page (now a 404) ceased to claim, "In Stock". I placed my order by 7:35 AM, and my dad bought the same unit by 4PM. We both received positive order confirmations.

Please note that the item(s) listed below have been removed from your order per your request to Customer Service, or because the item is no longer available.

Though I didn't receive any nastygrams, Dad's went on to say, "Order request confirmations received from our web site do not guarantee delivery of the items ordered", so I thought it prudent to place a call to customer service this morning.

I was told that while my order wasn't being revoked, exactly, they were not planning to ship me anything unless they received more drives. They would have a better idea of if, not when, that would transpire "in a few days", though the rebate turns into a pumpkin if I don't postmark it in the next two weeks. Should I desire any more updates, I have to call them, because their order-tracking page has been returning a 404 for two days straight, a fact which took my customer-service rep by surprise.

Back in the nineties, Outpost was a fine upstanding dot-com, with a pleasantly ludicrous "same-day overnight shipping for free, on all sales" guarantee. I bought an iMac from them once. I haven't bought anything from them since they were acquired by Fry's in 2001, nor do I plan to, nor do I suggest you should, at least without placing a phone call before and after. 02:30PM «