Movable Type 3 is a great upgrade, and looks likely to continue to improve. The main menu, however, now includes a dopey little box of links to Six Apart-penned news releases, which means my site is periodically querying Six Apart for tidbits to which I am probably already exposed in about a dozen other ways. I don't like the occasional performance hit loading the menu page, I'm not crazy about creating a latent log on their server of my activity on my server, and it's not a good use of space.

I signed up for Six Apart's "ProNet" last week, and today figured out that the secret for accessing their inexplicably members-only knowledgebase was to download the ProNet member distribution of MT (which I'd skipped in the knowledge, since confirmed, that it differed in no way from the regular version). The best nugget of information I've found so far in the knowledgebase is the under-documented mt.cfg directive to shut off the newsbox:

"The Wire", hands down the best show on TV, returns for a fourth season in 2006. If you're not already a die-hard, let me know and I'll sign you up for a month of free-trial Netflix, which is about enough time to digest the first and second ~10-episode seasons. 08:54PM «

is a sparkline depicting a recent 12-month window of my Netflix rental history, where red lines indicate months in which my average rental cost was higher than $2.00, and black less than $2.00. (Netflix's monthly rate shifted twice over the last year, explaining the small discrepancy you may notice in the last line.)

Here is the tabular data from which the chart was generated. It contains extra information, most notably exact dates and precise scale, but it occupies approximately 65 times as much space and can't be absorbed in a breath. 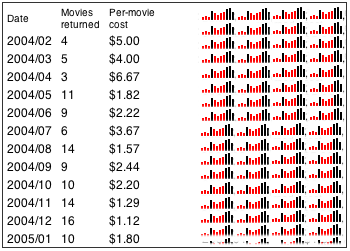 By comparison, the table's data-density is dismal, on top of which the micro-graph does a much better job of rapidly pushing across its underlying meaning -- to wit, that if $2.00 is my per-movie target, I only lately started watching enough movies.

The chart was generated with an early version of the Sparkline PHP library, which marks possibly the first time in this perl-hound's life that I've ever coveted a PHP tool. It looks delicious, and like sparklines themselves, really deserves to be embedded into markup. I'm impressed. 07:03PM «

John Richards played an astonishing song this morning (March 8) at 9:46 AM -- a ballet score remixed in 1967 by its authors, remixed again in 1997 by Fatboy Slim, later reinterpreted and cut down to 40 seconds as the clankingly brilliant Futurama theme. This is the seven-minute Fatboy Slim rendition, and it's in the streaming archives for two weeks. Brief commentary at 9:56. 12:21PM «

Time again to play, "What's wrong with Maria Cantwell?", who yesterday voted with a 74-24 majority to kill a Mark Dayton amendment on the bankruptcy bill that would have limited consumer interest rates to an eye-popping 30 percent. Lady, Dino Rossi is gunning for your seat already, and this is not how you make friends. Zero Republicans voted for it, including ostensible moderates like Chafee and Snowe. Patty Murray voted against it, leaving me for the moment ashamed of only 50% of my Senate delegation. 05:18PM «

The Seattle library catalog upgrade I mentioned recently was a bit of a bust. I knew it was going to be a later version of the same software, but it turned out to be frustrating in all of the same ways. It still builds item lists with client-side scripts, defeating tabbed browsing, and it's still slower than waiting for chilled butter to reach room temperature.

Simple searches are impaired by extraneous, weirdly prioritized metadata. An explicit title search for Walter Mosley's fabulous post-Watts Easy Rawlins novel "Little Scarlet" returns in the first position "Fairy tales of Russia", because it contains a story (recorded in the contents field, not visible from the results page) called "The little scarlet flower."

Why is the contents field given greater weight than the book title? The entire first page, ten results, doesn't contain the word "Scarlet", and the single instance of "Little" comes in the soundtrack to "Little Women" ("Scarlet fever"). Mosley's book appears halfway down the second page of results, where few Google-trained searchers will even think to look.

If you search for "Little Scarlet" using quotation marks, "Fairy tales of Russia" still has the top spot for some reason, but Mosley is number two. God help you if you're searching for a ubiquitous word like "Ivy" -- 176 results, ten per slow-loading page.

The new RSS support may eventually prove the handiest form of search, because the URL can be adjusted to provide an arbitrary number of results, and one never knows where the title you want is going to turn up. RSS support appears limited to item searches, though (I can't find a feed for, say, my hold list), and without knowing how to pick apart the query URL, there's no way to search for an item not currently in stock. Long way to go. 07:05PM «

With the OED as final arbiter, and despite William Safire as peanut gallery, I won an argument a few weeks ago that the word "relatedly" does not exist in polite company. However, I was brought low this morning as I realized that "administrivia", a fantastically useful word with which I grew up, and which surely has a claim on life as strong as "administress" or "adminutive", does not exist either. It's not even in doubletongued. Time to pester some British lexicographers. 07:40AM «